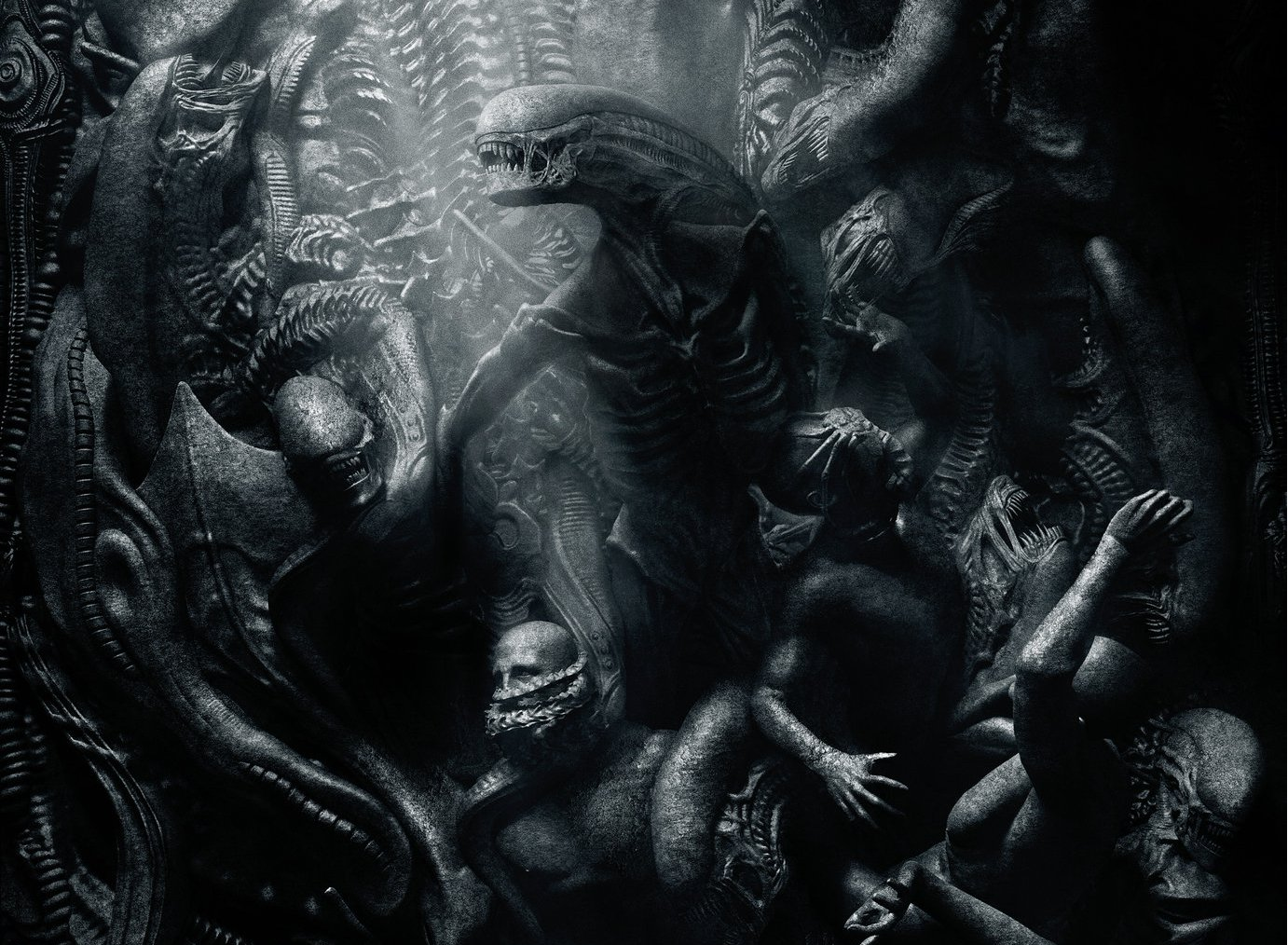 People justify lowering the bar on entertainment all the time. But compared to a TV licence, which will allow you to legally consume as much garbage as you can for a fairly low price, cinema-going can get rather expensive. And this is where a film like Alien: Covenant owes a massive debt to the public. Audiences (humans with money to spend and some leisure time) seem really confused by this film. It's not surprising, because it's simply a mess.

No one should come away from a film wondering what the hell just happened. Especially while their wallet is still smoldering from the epic burn of an overpriced cinema ticket. And it would be just like the film industry heavyweights to show no accountability for letting such an incomplete project into the open. They'll just move on, albeit swaying from the pleasurable burden of other people's money.

The structure of Alien Covenant

It's a mishmash of scenes, some noteworthy, most baffling, and some just worth leaving the cinema to avoid. I won't cover the small offering of decent scenes in this blog, because people pay to see a fully finished feature. Alien: Covenant definitely isn't that. In fact at times it even has a sort of B-Movie quality - a hint of the ludicrous. This is fine for films like Sharknado, but not what audiences were prepped to expect from the latest Alien offering. There were also lines in the film that should have been taken out at a first edit stage.

David's motivations for being so inherently malign remain as much of a mystery as they did in Prometheus. There's just nothing any human viewer can connect with. And because this element wasn't established from day one, the problem just spread to the next film. Kind of like a pathogen.

Fortunately Fassbender does modulate his performance to bring humour to the role. But aside from that, he's just a knave, albeit a particularly evil one. A bad script along with hapless direction would test the best of actors. They just have to work with what they get.

The crew: Two thousand colonists in their hands

Oops. It looks like this crew are from the same school of thought as the geniuses aboard Prometheus. I wouldn't trust them to make bread into toast.

Let's put ourselves in the position of a crew leading a huge-scale colonisation mission. Would you take a detour to a planet you haven't thoroughly vetted? Having then decided to make this awful decision, would you not then try to at least send an untraceable probe instead of getting your ship as close as possible and endangering the lives of all the colonists and crew? Would you care if a random transmission sounded like the song 'Sweet Home Alabama'? Given the gravity of the overall mission, who cares about something so trivial?

The biggest issue here is that the actions of the characters are being forced to meet with the direction of the plot (the film doesn't really have a plot, but anyway...). It should be the other way round. Characters drive plots - it's darn interesting when they do. The character's decisions also have to be believable. The decision to make a stop off with 2,000 something colonists on a whim just doesn't work. This wouldn't work in any dimension. People simply don't make decisions that illogical when the stakes are so high. Bare in mind that this crew aren't just on a galaxy tour as a quick laugh.

The story and its conflicts

Let's break the story into two parts here, because there are actually two stories going on, both of which are at odds with each other.

The colonisation story isn't exactly new in science fiction. That's not to say these types of stories - or variations on this story - can't be fresh and interesting. They can. But in such cases it is much more interesting story-wise to jump in partway through the main story. In reality this means starting the film when the actions of the characters have already started to have a bearing on each other and their new home.

This wouldn't be the first time Scott has tried to staple two conflicting story strands together, or meld them etc. I have to admire his thoughts here, as the idea of tying the creation of a selection of perfect organisms to the dissilusionment of a synth is actually kind of cool. But it's still not convincing. It's also overambitious if you can't translate it or work it out beforehand. Scott should have commited to one idea or another. To a certain extent, I would have much preferred it if he'd stuck to the idea that these things just evolved to meet with their conditions. It's simple, but simplicity often works best.

Why is this film so bad?

When you're not directly involved with a film, or you can't tap directly into the industry, the only thing left is knowledge of storytelling. This involves looking at the component parts of a film (or story whatever) for inconsistencies. This is what an editor does to a certain extent with a piece of fiction. You can sometimes tell something's wrong on a gut feel level, but it's important to use evidence to back this up if you can.

Firstly, I think the characters and the story are highly underdeveloped. That's not to say you can't to drive a story using simple characterisation. The people in the original Alien movie aren't riddled with multiple internal conflicts. No, it just took a few brush strokes to give these living, breathing characters some basic dimensions. In Alien we get this. In fact, it's quite economical, and with some quick pieces of dialogue we know who these people are within the space of about 30 seconds.

The characters in Alien don't want the earth. They're not on a mission of great importance to humanity. Why would someone put that much pressure on a creative project? In essence, something like that is likely to fail. A story is more likely to kick if the scope resembles the eye of a needle, not the range of a mountain.

Another aspect of failure is the script. One way to develop characters is to just write some example lines of the kind of things they'd say. Work it out on paper. I can't recall anyone in Alien: Covenant having any recurring sayings or character traits. (This is storytelling lesson level 1 by the way, so that gives you an idea of how things have become).

I think what's happened is this. Ridley Scott has given this big, undeveloped idea to scriptwriters. They've tried to interpret it in the best way they know how. But if I know experienced writers, they probably just wept, then dried their eyes with the six figure pay cheque. (Those cheques are quite absorbent). Then the writer came back with an inevitably bad script, full of frustration and bafflement, more than ready to move on to a more fulfilling project.

Ridley Scott is still able to create worlds which place us outside of our own reality. He creates scenes that are stunning - sometimes even economically so. But so do Guillermo del Toro and James Cameron. Scott's ability to envision arresting surroundings doesn't make up for the many failings of Alien: Covenant. (Plus I think the CGI techies have to actually make things look pretty anyway). The film should be judged as a singular dramatic expression, somewhat like a short story. If I saw the kind of weaknesses present in any story like there are in Alien: Covenant, it simply wouldn't sell.

So why aren't the people behind this film noticing the issues earlier? How is a film so flawed from someone with so much experience getting to market? I can only suggest that Ridley Scott has transcended criticism some time ago. Or that people dare not question his authority. Of course this is crazy. He's a director, with total responsibility for the final output, but a director nonetheless. There are many film craftspeople out there, and he's in competition with them, just as they are with him. Remember that a director exists to tell stories through a lens. They should be good storytellers first.

Unless Ridley Scott is going to commit to his themes of creation and the meaning of being human (these of course come up in Blade Runner), then he should stop making these films.

I think one of the things it's hard to admit is that Alien has mutated into a dying franchise that might only be rescued by leaving it and moving on, or passing it on to another director. I think part of the problem is hanging on - and trying to develop - a story where any uniqueness began to fade just beyond the second film. So invent some new stories, do something new. By all means, set all your stories in space, people love that, but they want films that have been given more thought, because they'll be more entertained that way.

Prometheus and Alien: Covenant are two films that spell a deterioration in this franchise. Because like it or not, Prometheus is tied to the franchise for good or ill.

These films are starting to have the flavour of the Star Wars Trilogies that shall not be named, because George Lucas attached the weights to his own career coffin when he made those. Or didn't make them, or was lazy, or disinterested, or whatever. To hear Ridley Scott talk about following this project up off the back of these last two films just fills me with dread.

I think films with this many preventable flaws need to be vetted before release. Forget for a minute that they already now carry an unfortunate history. The next film needs greater participation from external sources with the ability to form a story. Kind of like an intervention, but in the film industry. At least that one thing would have more potential for film dignity.